To celebrate Halloween, have a story that won a Halloween Short Story collection last year. 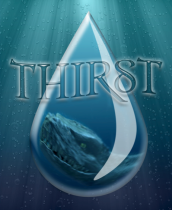 Toxic water splattered across Don’s face. He wiped it away and raised the glass to his lips again.

“Don’t do it!” Matt warned, tut-tutting his finger around like a stock photo grandmother.

“You know what the signs said.”

“Psh,” Don dismissed his continual warnings and downed the glass fast. “Gah!” he gasped, clawing at his neck, the glass thudding into the sand. Don fell down, his spastic legs kicking against the surf.

Matt sprung back in terror, “What! What is it?”

Don grinned at him and rose up on his elbows, “Tastes like the south end of a north bound cow.” Matt punched him on the arm and scooped up the souvenir cup, now empty of the undrinkable seawater.

“It didn’t improve your intelligence, that’s obvious,” Matt said. He picked against the gnawed plastic edge of the glass.

“Told ya it wouldn’t do anything,” Don stuck out his jaw, proud of proving himself right.

“If you say so…” Matt answered, watching the green smudge undulating atop the sea waves. It never moved inland, as if invisible strings anchored it a half mile off the beach.

The scientists called it “interesting,” the news used it as an excuse to pull out their best fear graphics, the government officially shut down the beach to cover their own asses (not that it stopped locals from climbing the barricade). If anyone knew what the green wave really was, they weren’t talking.

An hour of illegal beach fun passed before Don doubled over, his intestines wrenching themselves in knots. Shouldering around a pair of kids, he broke into the port-a-pot as bile burst from the depths of his bowels. Green as the wave, it sloshed into the shallow plastic bowl. A pair of gnawed hot dog ends rolled around in his filth like logs down a river. Don swallowed to curb the burn gouging his throat, but that drew in the smell.

Despite looking like boiling green Jell-o, an astringent scent wafted from the mess beside his gasping mouth.

“Don!” Matt knocked at the door. “Are you okay in there? Don…” He continued banging, always a worrywart to the end.

Don yanked the flimsy toilet paper off and tried to clean his face. Flushing goodbye to the evidence, he rose off the gritty plastic floor and gulped. More of the astringent smell, like he drank bleach, filled the air. A thirst, stronger than a dying man crossing the dunes, scratched up his throat. He pushed on the unsealed door to find Matt bowed over his cell.

Matt looked up at the sound and shrugged at getting caught, “I wasn’t sure where you were. What happened?”

“Nothing. Don’t worry. Too much cheap beer and shitty food. I should get home, sleep it off.”

Matt leaned in for a kiss, but Don waved him off. The stench of his upended intestines still infused his nose. How couldn’t Matt smell it? But he offered a hand to steady Don and they ventured across the baking parking lot to find his car.

Don slid off the bed, his foot tangled in the sheets wadded up in a nest. He didn’t remember collapsing on top of them. Fog bubbled through his brain, struggling to surface any memories after stumbling through his door. All that burned through the mist of his mind was an unending thirst. His dry tongue flopped to the side, tasting only of gritty sand. Dozens of plastic cups, remnants from Taco Bell runs of old, circled around the bed. Exhaustion numbed his dexterity and he fumbled through his summoning circle, water spilling across the vinyl wood floors.

He slid into the bathroom and shirked back from the light. Thirst shredded his throat as clusters of pain burst behind his eyes. He edged around the sink, searching for the handle until water gushed from the tap. Don spooned it into his mouth with his hands, the rivulets barely soothing the burn, before shoving his head into the sink and suckling it straight. The metal of the rusty faucet tainted the water as the flavor of rich iron flowed down his gulping throat. He slid the tap off and rose to look himself in the eye.

Bloodshot Don glared back, his lips thin and cracked. A bump rose from the back of his head he didn’t remember getting. Carefully, he probed the softball sized welt and fished his phone out of his back pocket. Dozens of messages waited for him.

Don shook his piece of shit phone hoping that would reset the date, but it remained Friday. That was impossible. It was Monday, Labor Day. He was gonna take Matt on a date at the beach, but then it got closed down, so he passed out on the bed…and that was as far as his memory stretched.

He thumbed through his phone, finding missed calls from his mother, his job, Matt, while he prodded at the welt on his head more. It didn’t hurt, but it squished in like a water balloon. A sick curiosity urged Don on as he poked deeper in, trying to pop the balloon. His fingers hovered a few millimeters from his skull, denting in the pus-filled welt, when something slithered in the depths.

Jerking his hand away, he accidentally threw his phone across the bathroom. It shattered across the stained tile into jagged bits of plastic. He glanced at it, but didn’t move to pick up the pieces, to curse in anger. Thirst crawled up his skin. Without stripping off his wrinkled t-shirt and jeans, Matt climbed into the tub. An inch of frozen water clung to the bottom. He yanked open the tap and sunk down, his lips sucking in the musty water as fresh rushed to replace it.

Sunday morning a man stood at the edge of the sea, fog rising off the phosphorescent green wave. His hands hung limply at his side, blood dripping from the knuckles. The sea waves rose up to greet the car dug into the sand, resting on its battered side. Glass tinkled with the sea’s garbage from the broken window.

Thirst filled his veins, his cells, his soul, dragging him from the bed. Don didn’t remember the car or coming back to the sea. He couldn’t remember where his apartment was, his parent’s faces, his own last name. All that filled him was the thirst, throbbing from the top of the beach ball sized welt on his head down to his toes. Don dropped to his knees, shoveling seawater into his unquenchable mouth. The salt bit, leaving more of the metallic iron flavor behind, but he couldn’t stop.

Drinking wasn’t enough. He stripped away his shirt, unbuttoned his shrunk jeans, and yanked off the one sock. Toxic water rolled over his bare skin, the sand opening up his pores. Crawling on all fours, Don inched deeper into the sea. With each step, he dropped his head down, scooping up more water as if it were a loving embrace he ached for. After a dozen feet, as the shoreline slipped away, he didn’t pick his head back up.

Water oozed into his mouth and up his nose, filling his throat, those traitorous intestines, and finally the lungs. The body that was once Don smiled. At last, it was no longer thirsty.

There was no body to find, only a stolen car and his clothes. The green wave dispersed, scientists calling it a rare algae bloom, and the beach was reopened. Children could splash, swimmers shatter the waves, lovers entangle themselves below the moon, all unaware of what lurked below. Knotted deep within the seaweed rests a human carcass picked and prodded by crabs. They nibble at the toes, ripping off the flesh, devour dead muscle, but none go near the swelling head. They know what rests inside that throbbing mass, a monster older than the sea itself.

Below the summering masses, in the depths of the sea, sits an egg incubating inside a human body. Soon it will hatch.

Ellen Mint adores the adorkable heroes who charm with their shy smiles and heroines that pack a punch. She recently won the Top Ten Handmaid’s Challenge on Wattpad where hers was chosen by Margaret Atwood herself. Along with her husband and black lab, she spends a lot of time with her skeletons — don’t worry, they’re just Halloween props.